Written in the stars? Season 16 of Married at First Sight takes place in Nashville, Tennessee, and as fans have already gotten a first glimpse at the newest cast of newlyweds, many are wondering about their zodiac signs – and whether they’re compatible or not. Keep reading to find out everything to know about the season 16 cast of MAFS, including their zodiac signs, jobs, what they’re looking for in a marriage and more.

What Are Airris and Jasmine’s Signs?

Airris is a Taurus, while his new wife Jasmine is a Cancer, according to a video posted by the official Married at First Sight Instagram account in December 2022. Taurus and Cancer’s compatibility is often described as “soulmates,” meaning this couple could be the pair to watch this season.

While Jasmine’s career is unknown, she is “more than ready to settle down and start a family,” per her bio on Lifetime. Similarly, Airris – who underwent a major career change and now works as a software engineer instructor – wants to “plant roots” and start a family.

What Are Christopher and Nicole’s Signs?

Christopher and Nicole are both lovable Libras – and that’s not the only thing they have in common. According to their Lifetime bios, the pair relocated to Nashville from major metropolitan areas (Christopher from Chicago and Nicole from New York City) in hopes of escaping the hustle and bustle of city life – and finding true love.

What Are Clint and Gina’s Signs?

Clint is a Virgo and Gina is a Taurus – a zodiac pair that revels in stability, understanding and more.

Clint is described as an adventurer with many passions who loves learning and listening to experts, which makes him an ideal candidate for finding true love on a show that is all about trusting experts. For her part, Gina is a wildly successful and well-known hairstylist in the Nashville area who put her dating life on hold after a bad breakup four years ago; however, after building up her salon business and focusing on her career, she’s ready for someone she can travel with and “potentially build a family with.”

What Are Mack and Domynique’s Signs?

Mack is a Gemini and Domynique is a Leo, a match that is loyal, supportive and ambitious.

Though Mack – who recently moved to Nashville – has always put his career first, he’s now ready to settle down and start a family. Domynique, on the other hand, hasn’t had many long-term relationships but is confident she’s ready for marriage, according to their Lifetime bios. 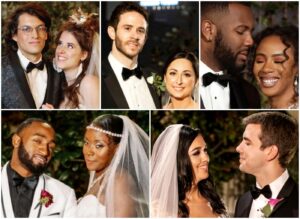 What Are Shaquille and Kirsten’s Signs?

Shaquille is an Aries and Kirsten is an Aquarius, signs that both value independence and adventure.

Faith is extremely important to both parties, per their Lifetime bios. While Shaquille is in a “great spot” in his career and personal life and prides himself on being open-minded and “ready for love,” Kirsten “hopes the experts can find her a godly man who will not be scared of her success and is willing to grow with her.”

When Does Season 16 of ‘MAFS’ Premiere?