Five Nashville couples will say “I do” in the show’s upcoming season.

Married at First Sight’s San Diego season came to an end a few weeks ago, but fans won’t have to wait long for new episodes of the Lifetime reality series. The show returns in January 2023 with a fresh cast of singles who hope the show’s experts can put them on the path to true love. But the path to happily ever after won’t be smooth, especially when one husband makes a shocking move that leaves everyone reeling

Married at First Sight returns to Lifetime on Dec. 28 at 8 p.m. with the MAFS: Matchmaking Special. It features a behind-the-scenes look at the show’s intense matchmaking process. On Dec. 29 at 8 p.m. ET, the MAFS: Kick-Off Special airs. Host Kevin Frazier will sit down with a panel of Married at First Sight superfans to discuss the upcoming season and analyze exclusive sneak peeks from the upcoming episodes.
Married at First Sight Season 16 officially premieres Wednesday, Jan. 4 at 8 p.m. ET on Lifetime. This super-sized season will feature 23 episodes, including three bonus “Beyond Decision Day” episodes that will follow the couples after the experiment ends. 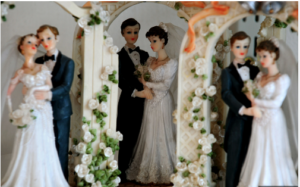 Ten Nashville singles will hand their fate over to the show’s team of experts in Married at First Sight’s 2023 season. They are:

Christopher, 36, who is a business coach, and Nicole, 32, a senior marketing advisor

Mack, 34, a director of operations, and Domynique, 25, an associate sales broker

Every new season of Married at First Sight brings fresh drama. But season 16 sounds like it might be more explosive than most. Lifetime is teasing a “shocking twist” for the Nashville couples, which sees one of the husbands making an indecent proposal to another man’s wife. Who’s the sneaky husband who tries to step out on his wife with another cast member? Fans will just have to watch the new episodes to find out.

Season 16 will also feature the return of guest experts DeVon Franklin, a best-selling author of relationship books, and Dr. Pia Holec, a psychotherapist who specializes in sex and couples therapy.