Either the holiday season makes people rethink their breakups due to loneliness or out of a genuine desire to reconcile because Married at First Sight alums Olajuwon and Katina Dickerson are back together just months after their split. The controversial couple received backlash during the Boston season due to Olajuwon’s constant criticism of his wife’s lack of significance of domestic skills. Many were shocked they said yes on Decision Day, and even more so when Olajuwon insisted he changed his caveman ways at the reunion special. But after just a year of marriage, they were done. Now, recent social media posts show they’ve rekindled their flame.

During the Season 14 reunion special, Olajuwon gifted Katina an upgraded ring. The experts and their co-stars congratulate the couple on their progress. They continued to share their love on social media. But it didn’t last long.

The couple released a joint statement on Instagram confirming they were divorcing. “After one year of marriage and careful thought and consideration, we have decided to part ways,” the statement began. “However, this was not an easy decision to make. We leave our marriage with enormous love and respect for each other. We only ask that, at this time, our privacy is reputable. It appears comments for the post may be disabled.

Before the breakup announcement, the last post of them together on both of their respective Instagram accounts was from Sept. 14. In the time leading up to the announcement, Olajuwon has been sharing updates about his dog’s health and posting workout videos, while Katina hung out with their co-stars. Comments on the post were disabled. 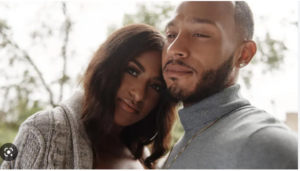 The two are currently on vacation together and have reconciled

What led to the split was unclear. But weeks after the post, Katina shared in an Instagram live Q&A that the hardest part of being a public figure was social media users’ opinions on her choices. She also preferred staying out of the spotlight and confirmed she was single at the time. Olajuwon’s social media wasn’t as active.
The divorce announcement has since been deleted from both of their accounts. It appears the reason why is due to their reconciling. Within the past few days, the pair have been sharing photos and videos to their Instagram accounts via stories of them on a tropical vacation together.

Katina’s latest post features a shot of her and Olajuwon sitting together on a chair and smiling. She captioned the photo: “If we take off now we can catch the sun,” alongside an airplane emoji. Comments are disabled on her post. Olajuwon shared photos and videos of him and Katina on a snorkeling excursion.
Why Katina previously said she overlooked Olajuwon’s flaws
Despite being hurt by Olajuwon’s criticism of her on the show, Katina refused to give up on their marriage. She says watching his behavior back on television was a learning experience for him.

“A lot of people don’t get the opportunity to see how they are so when you get to watch yourself and how you come off, it’s like ‘Oh wow.’ You’re either going to be somebody that’s like ‘I don’ t care’ or you’re going to be someone who’s going to be like ‘I really don’t like that about myself.’ So, for Olajuwon, he was like, ‘What? This was mean!’ It was kind of like an outer-body experience for him,” she explained during an interview on the Are You My Podcast.

Katina says Olajuwon showed her change through he actions. She added: “You have to look at someone’s actions. Olajuwon’s actions showed me that he wanted to be a committed husband and since we got married, every day – I think people think it’s like he just snapped a finger and was like, ‘Oh I’m changed today.’ No. When I met him, it was like an every single day process.”