Find out who else Cynthia Bailey and Teddi Mellencamp Arroyave will be living with in Season 3’s star-studded CBB house.

The cast for Season 3 of Celebrity Big Brother has just been announced, and it includes loads of familiar faces for Bravo fans.

“Y’all, I am about to go ALL IN on the #BBCeleb house this season!” Teddi also tweeted. “It’s gonna be a good time.”

The women have also received a lot of support from their loved ones on their next adventure, including Cynthia’s husband, Mike Hill, who gushed on Instagram, “My baby @cynthiabailey is in The House!!! Check her out & support her on [Celebrity Big Brother]. Win baby!!!”

Teddi also shared a video in her Instagram Stories of husband Edwin Arroyave, daughter Slate, 9, and son Cruz, 7, cheering her on from their living room as the cast was announced. 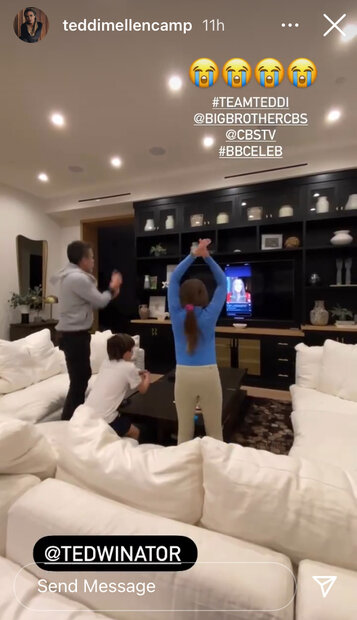 Meanwhile, Teddi seemed to be having much less fun while quarantining by herself in her hotel room before this season of Celebrity Big Brother begins.

Cynthia and Teddi won’t be the first Housewives to compete on Celebrity Big Brother. RHOBH alum Brandi Glanville was a houseguest in Season 1, previously appearing in the U.K. version in 2017, while RHOA’s Kandi Burruss was part of the Season 2 cast. Brandi and Kandi finished in seventh and fifth place in their respective seasons.

Celebrity Big Brother Season 3 will also feature another Bravo alum: Carson Kressley, who was part of Queer Eye’s original Fab Five and later starred with Thom Filicia in the interior design series Get a Room with Carson & Thom. “I”m gonna make over this whole place,” Carson said in a promo for the new season of Celebrity Big Brother, before adding, “When I’m not busy backstabbing and conniving.”

We’ll also soon see Cynthia back on Bravo when Peacock’s original series The Real Housewives Ultimate Girls Trip premieres on Tuesday, February 8 at 9/8c. Check out the official trailer, below.